Your own self-realization is the greatest service you can render the world. -- Sri Ramana Maharshi

'Retreat in a Box' - Your own self-retreat at home!

Tina teaches awakening to a deeper Reality and Truth, beyond our conventional way of understanding human experience. She offers teaching and spiritual mentoring to both new and experience practitioners. As part of the cultivation of the “luminous mind” referenced in many spiritual lineages, she teaches many practices including samatha, vipassana, dzogchen, and modern non-duality, which cultivate a fertile ground for the seeds of liberation to grow and become established in daily life.  Tina has lead events and worked with people one-on-one from more than 50 countries around the world, since 2007.

Tina Rasmussen was taught personally by the Ven. Pa Auk Sayadaw, who authorized her as the first Western woman to teach the practices in his lineage. Ven. Pa Auk Sayadaw of Burma is considered by many to be the leading Buddhist meditation master alive today. Tina’s book, Practicing the Jhanas, is an accessible and direct experiential account of the samatha practice, and is published by Shambhala.

The Samatha practice is an ancient type of concentration meditation that predates written history as a method to purify the mind. It was taught to the Buddha by his teachers, and when people asked him what to practice, this is the practice he referenced in as many as 60-80% of the suttas, throughout his life. This practice was so important to him, that it was his last act before he died. 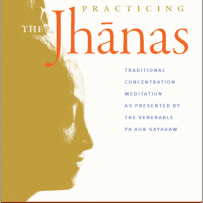 Tina now teaches the Samatha practice, as well as Understanding Awakening, and the Luminous Mind practices which include a modern, neuroscience-based version of the Tibetan Dzogchen meditation.

Tina’s services offered both in-person and on-line include:

Tina has released a new 4-minute video summarizing the tremendous benefits of committing to the Samatha...

Tina was recently interviewed by “Buddha at the Gas Pump”, a site that enables people to relate and...

Tina Interviewed by Meaning of Life

Conscious TV’s interview of Tina, “Living the Enlightenment Drive,” is now available and...

Practice as a Balm in Difficult Times

Practice as a Balm in Stressful Times Question from a student: Recently, I have begun a very emotionally stressful...

In this article, Dr. Judson Brewer (former director of the Yale Neuroscience Clinic, and current...

Korean and Italian Versions of Practicing the Jhanas

Practicing the Jhanas is now available in Korean and Italian, as well as English. We appreciate the beauty of the...

Awakening Buddhist Women featured Tina in their Dec. 14 blog. The post is an overview of an article on Tina in...