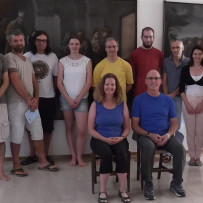 This 1-week retreat included 35 retreatants from 11 countries, including Italy of course, as well as Austria, Canada, England, France, Germany, Indonesia, Israel, the Netherlands, Switzerland, and Sweden. Many thanks to the organizers, Andrea S. and Andrea M. as well as our translator, Victoria. (photo is of part of the group) Here is a hotlink to learn more about this retreat: http://www.jhanaretreat.com/index-en.html.